Football jerseys have gone beyond being a means of identification in football games to becoming one of the most important identities of a football club for fans.

Football fans all over the world eagerly anticipate the new season, not just because of the return of action to the pitch, but to see the jerseys their teams will be kitted in.

Fans now fly their teams’ jerseys because of the colour that shows their loyalty, but now they rock their jerseys as a means of fashion.

Designers, shirt sponsors, and club sides are now taking advantage of this revolution in the modern game to make jerseys more fashionable and aesthetically pleasing.

Football has evolved beyond a form of recreation and entertainment, and football clubs now use jersey designs and production not just as a means of identification but to include fashionable elements and a mode of passing messages to fans.

Every off-season, new jerseys released are as common as transfer activities, and so far, so good we have seen clubs release new attires for the next season, and we look at the top ten of the best of them. Here are the top 10 best football jerseys of the 2022/23 season. 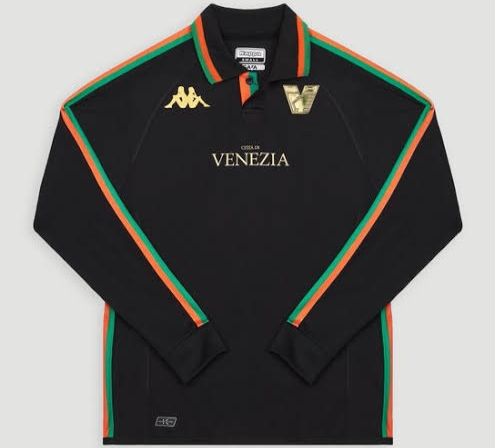 Venezia caught the attention of football fans across Europe and the world with their fantastic shirt designs for last season, which also made our list of the top football jerseys of the 2021/22 season.

Despite being relegated to the Serie B, they have not deviated from bringing class to the table of jersey design and what they have for the new season fits for the top flight.

Venezia’s home jersey is stunning bold black with a collar that has orange and green trim, a beauty that transcends the field of play.

Their new club badge is placed on the left chest of the Venezia 2022/23 home shirt, while a gold Città di Venezia text lies below the collar. The text is notably smaller than last season.

The home shirt was created in collaboration with Munich-based design studio Bureau Borsche, and is available in both short-sleeved and long-sleeved versions.

Meanwhile, their away shirt is a white base with slim hoops in green and orange and Venezia boldly inscribed on the chest.

If shirts gave promotion, Venezia would be back in the Italian topflight without kicking a ball. Well, the design doesn’t go over the top, but there is no way the colour combination wouldn’t catch your attention.

It is a deep orange and black detail combination that has hit the mark. The base is predominantly orange with a shade, but the neck and arm sleeves are boldly taped in black.

The Nike Brighton 22/23 away jersey has a beautiful wavy black stripe pattern, side panels, and trim, while the club crest sits on the left side and is white & red. 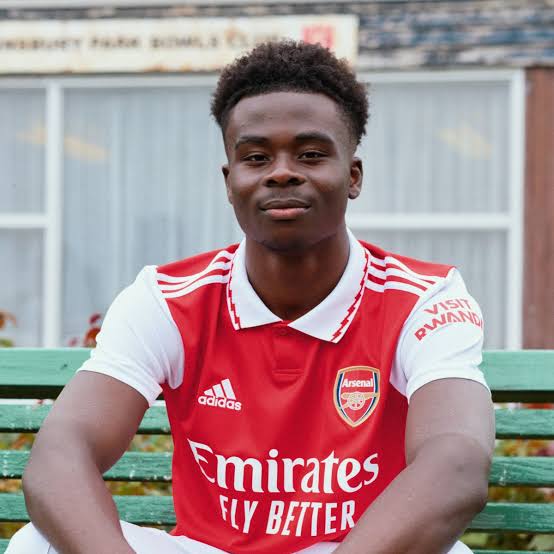 The North London club is known for always churning out some of the best kits. This season it is difficult to choose between the away and home tops.

The home design remains red and white, but they have returned to a collar with a striking design on it. The most attractive feature of the Arsenal 22/23 home kit is its collar, which is polo-style and has a red zig-zag design going around the rear. 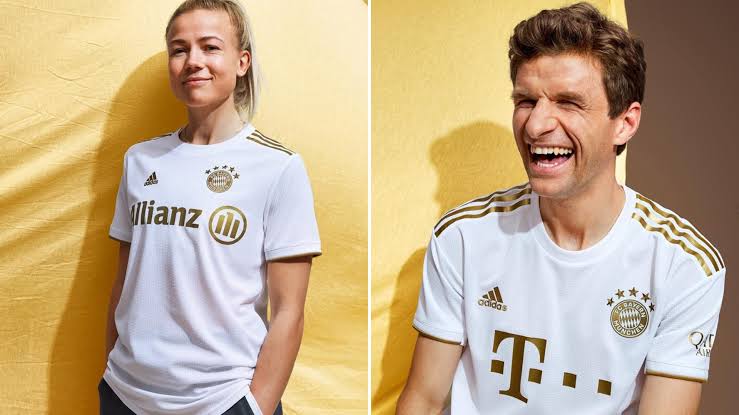 My oh my, Bayern Munich have done a good deal of beauty on their 2022/2023 away top courtesy of Adidas.

The new Bayern Munich 22/23 away kit combines a first-ever white & gold color scheme for the club.

The shirt design is stylish and combines a white base with shiny gold logos. It doesn’t have any graphic elements or other fancy design elements, but the away kit stands out tremendously.

I guess it’s right to commemorate your tenth consecutive Bundesliga title with golden trim and detail to a crispy white shirt. 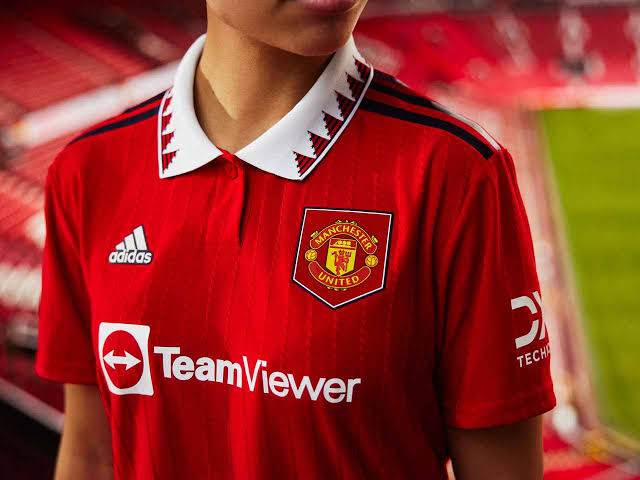 Some piece of beauty from the United and Red end of Manchester, and it’s their iconic red and black home shirt.

Manchester United’s 2022/2023 home kit combines a smooth dark red base color with a white Adidas logo (on the chest) and three black stripes (on the shoulders).

There is a sort of finesse that comes with the red base colour that looks both retro and contemporary with clean, sleek lines and subtle flourishes in the trim and finish.

However, what particularly catches the eye on the Man United 2022/23 home kit is the polo collar, which is a 1994-inspired triangular design.

In addition, the Manchester United logo is placed on a shield. The shield is pentagon-shaped and has a slightly red colour than the rest of the shirt. 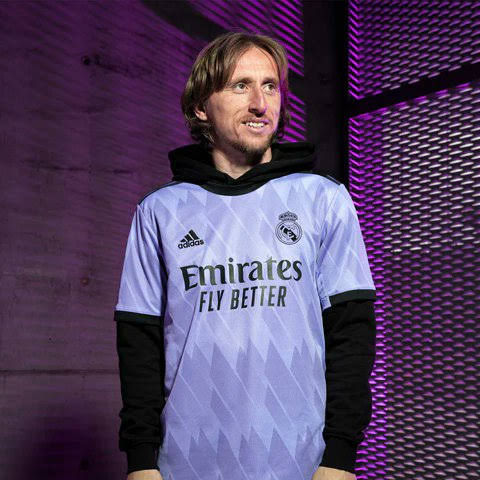 Hardly does the Los Blancos go wrong when they go purple on their away stripes, and this season, they have not missed the track.

This time though, they have gone with light purple with mountain-like patterns illustrated on the body.

The Adidas Real Madrid 2022/23 away kit also used dark navy on the collar, sleeve cuffs, names, numbers, and all brandings, including a recolored club badge that is placed on the left chest. 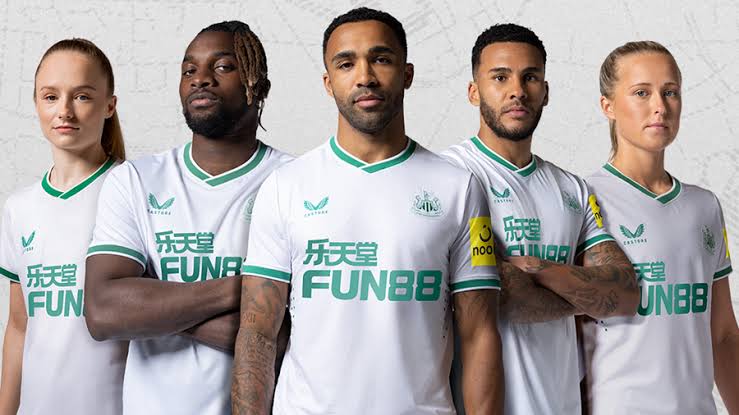 Hate it, love it, controversial or not; Newcastle United’s away shirt for the 2022/2023 season is one that deserves some attention.

The shirt has a clean white colour, with the club crest, collar, and sleeve cuffs embroidered in emerald green. And like in on all of Newcastle’s kits this year is the text ‘130 years’, which is meant to mark the club’s 130th anniversary.

The third kit has been compared to the Saudi Arabia flag and national team kit. Many fans have divided opinions on the kits, but it’s fine with some of fans who like the simplicity. 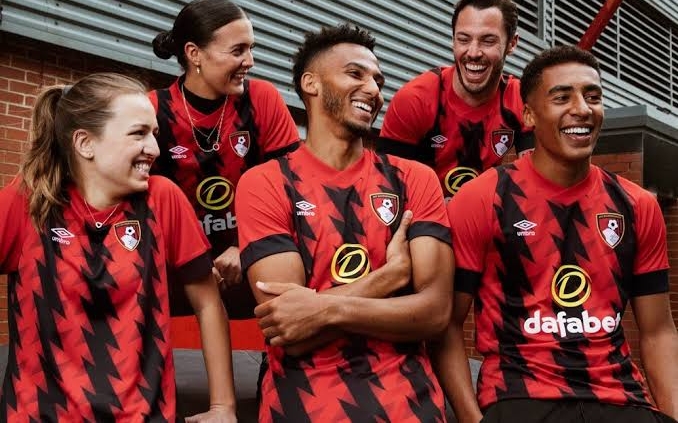 Bournemouth have dug deep to bring out a spectacular home jersey for their return to the Premier League this season. The newly-promoted EPL club came prepared kit-wise for the 2022/23 season.

The cherries have gone with the pick of the bunch with their usual red and black combination, but this time with a bold zig-zag or jagged stripe down the torso.

Bournemouth’s 2022/23 home kit also has solid red with black cuffs on the sleeve, a white Umbro logo on the right side of the chest, the club crest in its regular form left side, and a red V neck. 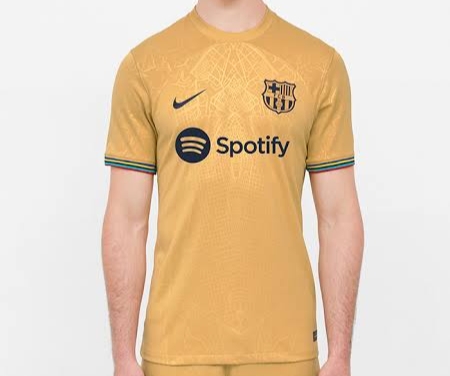 Barcelona may have one of the best away football jerseys with their away shirt for the 2022/23 season.

The jersey design was inspired by the 1992 Olympics, which was held in Barcelona 30 years ago.

Another impressive feature of the Barcelona 2022/23 away kit is the cuffs of the sleeves and on the socks, which have the colours of the five Olympic rings. 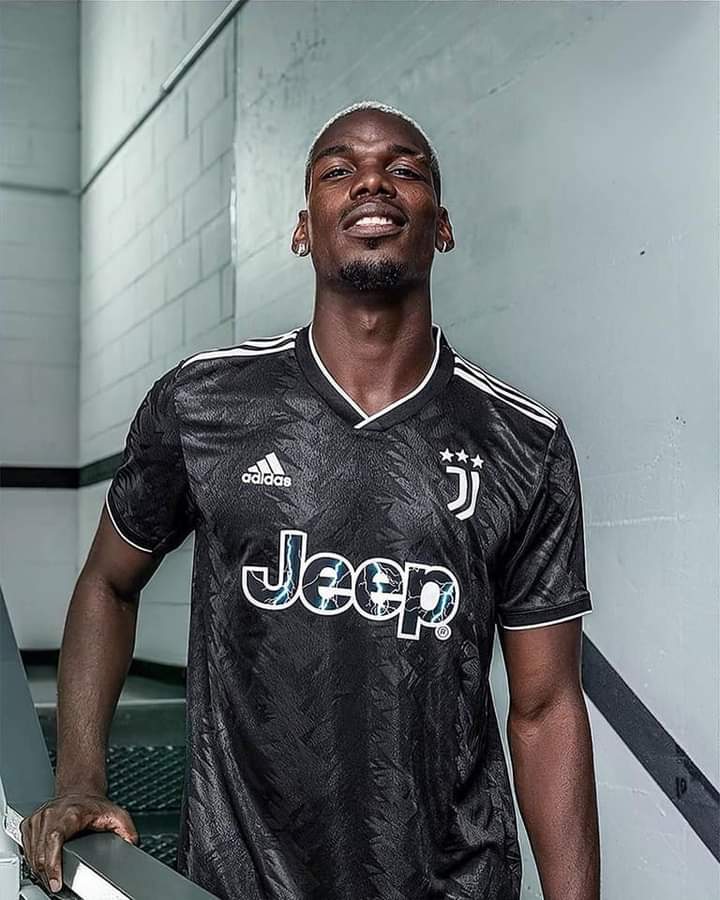 Juventus’ away kit deservedly tops our list of the best football jerseys for the 2022/23 season, but it’s their away kit.

Adidas created something remarkable with the away kit for Juventus, which combines black, white and dark grey.

The jersey has a dark base colour with white logos, and 3 white stripes on the shoulders. The sleeves and collar are also white.

However, what makes the Juventus away jersey a thing of beauty striped starry designs on the shit that appear in bold patterns and gives a shimmering effect.

The new kit is said to capture the atmosphere of night matches at the Allianz Arena. 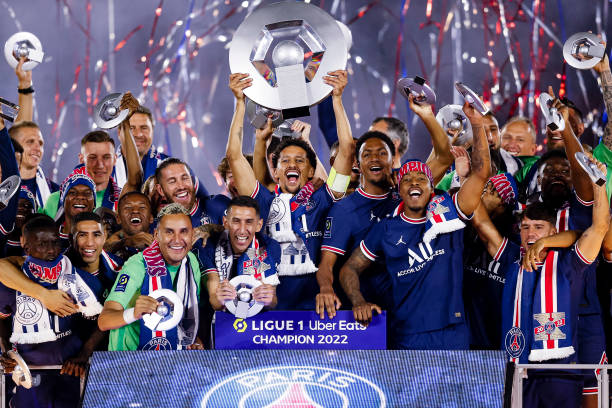 Next
Top 5 Best Goalkeepers in the French Ligue 1 2022 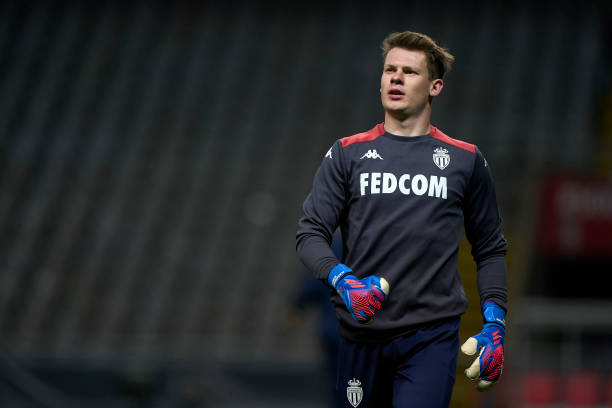