Diving is one of the most annoying or, depending on your view, entertaining aspects of football. Many long-term supporters of the sport are used to it — and some even commend good divers.

Regardless, this act of pretending to be hit or embellishing a hit to gain an advantage — whether a penalty kick, a card issued to the other team’s player, or whatnot — is a significant part of this sport, for better or for worse..

Let’s take a look at some of the more obnoxious dives caught on tape from the last 12 years.

Few can forget Brazil’s Neymar’s antics at the 2018 World Cup. Throughout that competition, he seemingly spent more time rolling around the ground and clutching various seemingly-hurt parts of his body than on his feet.

Included at that tournament was when a Mexican player went to calmly grab a ball that was lying next to Neymar and the Brazilian immediately grabbed his ankle like he had been shot there. And then he rolled for four complete revolutions several meters up the pitch after he had gotten hit against Serbia. The Brazilian forward has garnered a reputation for being one of the worst divers in football.

American soccer player Jozy Altidore gave the impression that he had been fouled by Ghana player Andrew Ayew at the 2010 World Cup as the two were running up the pitch.

As a result, Ayew received a yellow card, which brought him to his competition limit and ruled him out of Ghana’s next match, a quarterfinal, which the Africans lost to Uruguay in a penalty shootout, 4-2, after the teams played to a 1-1 draw. However, Altidore had literally fouled himself on that play.

Danko Lazovic, a former Serbian national who was playing for Videoton, a Hungarian club, in 2017, not only was not fouled on this play, but he embellished afterwards to a level few have seen.

His histrionics included him repeatedly wildly falling backwards on his back and forward clutching his leg in literally unbelievable pain.

Of course, within seconds, he seemed to have made a full recovery, talking to the referee. Alas, his acting ability did not help that day as Videoton lost the match, 1-0.

Just last month, during a Premier League match on Jan. 2, 2022, Aston Villa player Trezeguet was slightly touched by Brentford’s Saman Ghoddos. He then dramatically fell backwards grabbing his face, indicating that he had been struck there.

The fact that he was in the penalty box and his side were trailing in stoppage time was most likely just a coincidence. Unsurprisingly, he did not receive a caution or a suspension as a result of his antics, which many have described as embarrassing and as one of history’s worst dives.

Embarrassing by Trezeguet! Just ban him for 3 games. Retrospective action. Simple. What a clown. 🤦🏻‍♂️ pic.twitter.com/1rn2MBu9Ok

Arjen Robben, while playing for the Netherlands against Mexico at the 2014 World Cup, may not have had as egregious a dive as some of the others on this list, but do take a look at what happened in slow motion.

For one thing, his right leg starts the falling motion before he is even hit, indicating that diving was his intention from the start. For another, it even appears that his left foot dove as well before any contact was made with the Mexican foot next to it.

This action resulted in a Dutch penalty, which was converted, and a win for the Netherlands.

During an Africa Cup of Nations match in 2012 between host Equatorial Guinea and Senegal, Narcisse Ekanga, who had come on as a sub in the second half, was trying to help his side hold on to a 1-0 lead as stoppage time neared. To do so, he went flying in the air as an opponent neared.

However, what gets his antics on this list is more so what followed. He calmly grabs his right ankle and looks at the referee, expecting a foul. Once he noticed it was not being called, then he upped his acting to another level altogether.

During an A-League match played on Feb. 14, 2015, Sydney FC’s Sebastian Ryall fell down just inside the box, earning a penalty kick for his side.

However, he fell down completely on his own. In fact, the closest defender for the Melbourne Victory was facing away from him looking at a different Sydney player who was controlling the ball.

Understandably, the Melbourne Victory players were furious, and the commentators reacted in disbelief to the play, saying, “Seriously?!? What? Seriously?” and “Dear, oh, dear.”

During a Brazilian match in 2017, Bahia’s Lucas Fonseca wanted to “earn” a foul called against a Flamengo opponent, but what he did was obnoxious instead.

He may have been lightly touched on his chest, but his reaction was to immediately dive to the ground like he had been shoved.

However, those who despise diving will be happy to learn that Fonseca was actually punished for his action, being issued a yellow card. That turned out to be his second of the match, and he was sent off.

During a friendly match between Colombia and South Korea, James Rodriguez was not in a friendly mood. After Kim Jin-su went down, he forcibly picked him up, insinuating that he was not actually hurt.

Seconds later, the roles were reversed. Jin-su, upset at what Rodriguez had done, lashed out at him although he did not actually make contact with Rodriguez’s face. However, the Colombian acted like severe contact had been made and immediately flopped to the ground grabbing his face.

We’ll end this list with what may be its most blatant dive. During Northern Ireland’s World Cup qualifying match with Azerbaijan in 2012, Kyle Lafferty was desperate to help his side rally; they were trailing by a 1-0 score at the moment that he took hold of the spotlight.

In the 56th minute, Lafferty went down in the box. In and of itself, that’s not abnormal. What was obnoxious, though,  is that there was nobody even remotely close to him. As a result, he was booked by the referee. However, Northern Ireland did score late to earn a 1-1 draw.

What memorable dives have you seen?

Have you seen any dives that did not make our list, and you feel that they should have? Share them with us in the comments below! 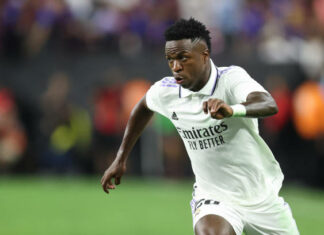 Collins Nwokolo - July 30, 2022
0
In modern football, the position of a winger is becoming more and more important as modern wingers now tend to score a lot of...