After being frustrated in their pursuit of attackers to boost their ranks throughout the summer transfer window, Manchester United eventually captured former PSG striker Edinson Cavani on transfer deadline day. The 33-year-old has penned a one-year contract with the option of another year.

He was signed on a free transfer after his contract with PSG expired but was paid €4 million as sign-on fee.

Cavani has been handed the club’s famous No.7 jersey and is expected to earn £10 million in wages.

6. He has represented his country in an incredible 8 major international tournaments and was part of the Uruguayan side that won the Copa America in 2011.

In an interview, he once said on his nickname:
“They started calling me it there [at Napoli], the fans.
The killer*. It’s a nickname that I like.” 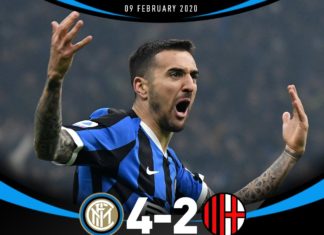 Collins Nwokolo - February 11, 2020
0
One of the highlights of the Italian Serie A season the derby match between Milan giants FC Internazionale and AC Milan lived up to...