Who is Tanguy Ndombele? He has been compared to N’Golo Kanté,  and has dazzled in the French Ligue One. In his recent Champions League match against Barcelona he put up an impressive performance.

Tanguy Ndombele Alvaro was born in Longjumeau in France on 28 December 1996. The Lyon midfielder has marvelled a lot of big clubs. His impressive performance has made him potential buyers like Manchester United, Manchester City, Chelsea and Barcelona. Here are five things to know about this youngster.

5 Things To Know About Tanguy Ndombele

1. He is likened to the best European talents

Ndombele has been compared to the likes of Ajax’s Frenkie De Jong and PSG’s Adrien Rabiot. Although he may sometimes begin a match or come at the backup position, his skills have no doubt been very impressive. Ndombele’s star is strongly engraved on the European map.

2. He is a French International

The midfielder made his debut by emerging as a substitute for Paul Pogba in the 67th-minute match against Iceland. Although the match was a draw of 2-2. He is of Congolese descent and played for the under-21 of France on about 11 occasions.

The 5ft 11 players was signed to Lyon on a one year loan. He played against PSG with a loss of 2-0. He scored his first competitive goal against Villarreal CF in the 46th minute with a win of 3-1 He talked about leaving Lyon soon.

4. Has an eye for assists

Tanguy Ndombele has remarkable dribbling skills and creates enough room for him to pass the ball. The Frenchman can boast of 19 assists to his name and no doubt he can set up more chances for prolific finishers since he doesn’t score many goals.

5. Has friends at Manchester City

Ndombele and the Manchester City full-back Benjamin Mendy comes from Longjumeau. So even if he decides to go with Manchester City, he already has a friend or two which would make it easier to adapt to the Premier League. His contract with Lyon ends at 2023, but he has already spoken about leaving. He believes he has to spread his wings in order to reach his full potential. 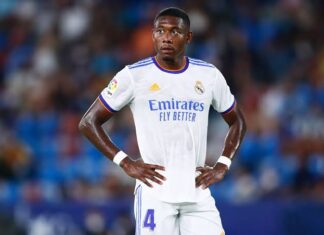 Collins Nwokolo - January 17, 2022
0
Utility players in football are very necessary for every football team. Someone who is able to play multiple positions can be a vital asset,...