Have you ever watched a match or even been live in the stadium when a random person or group of people suddenly run into the pitch out of the blues and unannounced? This is called pitch invasion, and the people carrying out this action are referred to as pitch invaders or streakers.

This is very common, especially in soccer games. Unfortunately, there’s no telling why a person may choose to invade the soccer pitch during an ongoing match.

However, some of the reasons that have been found to fuel this kind of action over the years are; either to protest, celebrate, or just simply to gain some kind of publicity.

Over the years, pitch invading has become more and more rampant among soccer spectators, and on very rare occasions, it could even be a large number of fans that would invade the pitch.

Whatever the case is, pitch invading is largely frowned upon by soccer officials. As a matter of fact, it is a crime in some countries like the UK, and perpetrators of this act are usually made to face serious charges.

Have you ever been boggled regarding what happens to soccer pitch invaders? We have got some answers.

What Happens To A Soccer Pitch Invader?

Here are a few consequences that pitch invaders could face.

Some pitch invaders have been made to serve something as serious as prison time.

This is more likely to happen in cases where the pitch invader disrupts the game or assaults the players or the officials.

The prison that the invader might be sent to could either be a normal prison or a stadium prison. And the prison time they are made to serve varies from case to case.

A popular example was in 2014 when YouTuber Vitaly Zdorovetskiy was arrested for invading the soccer field during the 2014 FIFA World Cup Final between Germany and Argentina in Brazil.

In some cases soccer pitch invaders are made to pay fines. Fines are monetary charges that are imposed on offenders.

Sometimes even the club involved is made to pay fines for breaching security. The amount of fine an offender is required to pay sometimes runs into thousands of dollars, and other times it might just be in the hundreds. It all depends on the severity of the case.

In a soccer match between Portugal and Ireland, a young girl ran into the pitch to meet Cristiano Ronaldo. Although she was given his soccer jersey, she was fined £2,500 for invading the pitch.

Pitch invading could lead to an outright ban from all future soccer games.

If an invader is slammed with a ban, he or she would no longer be permitted to be on any football ground and would have to check into the police station every time a match is being played.

This might include both national and international matches, as the case may be. The conditions of the ban vary from case to case, with some being as serious as having the passport of the offenders seized when an international match is being played to prevent the person from travelling to see the match.

However, sometimes, the ban only restricts the invader from being allowed in the stadium for future matches, while some soccer pitch invaders can be banned from all soccer stadiums.

These offender are banned from every soccer stadium in their country.

Pitch invading is a serious offense in the world of soccer, and offenders are made to serve some serious punishment. These punishments could range from; 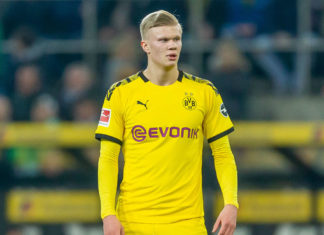 Could Erling Braut Haaland be on the Move Again in the...

Collins Nwokolo - March 24, 2020
0
It is quite possible to think that Erling Braut Haaland could only spend six months in Germany with Borussia Dortmund after signing for the...