Many talented footballers have graced various soccer pitches over the years. Their unique abilities and skills have attracted different clubs desperate for their services. Some of them have played for different clubs in different countries, while others have bucked the trend and are content to play for one club throughout their careers.

Continue reading as I highlight some of the greatest one-club players to have graced the beautiful game.

The Italian and AC Milan legend is regarded as one of the greatest in the game. During his playing days, the 52-year-old former Italian left fullback played an outstanding 647 times in the league for the Rossoneri. Blessed with great technical ability and an incredible ability to read the game, Paolo played for the Milan giants throughout his club career from 1985-2009. He was one of the best defenders in the Serie A in his prime.

During his time at the San Siro, Maldini amassed an intimidating number of trophies. Some of the titles won include Scudetto titles (7), A single Coppa Italia, UEFA Champions League titles (5), to mention a few. Individually he has been named in several UEFA and Serie A teams of the season. He also holds the record of appearing the most times for AC Milan cumulatively (902) and in the league (647).

The ginger ninja, as he is affectionately called, is one of the greatest and longest-serving Manchester United FC players in the modern era. Born in Salford, England 46 years ago, the former England international played exclusively for Man United throughout his career.

The technically gifted midfielder made over 700 appearances for the Red Devils over 19 years. At Manchester, Scholes won numerous English Premier League titles (11), FA Cups (3), League Cup (2), and UEFA Champions League titles (2), to mention a few. Individually he was named in several Premier League teams of the season. He is said to be one of the greatest players ever to have played for Manchester United.

The great Catalan defensive enforcer played over an 18-year period for Spanish giants FC Barcelona between 1996-2014. The 42-year-old former Spanish international made over 590 appearances for Barca over the span of his career, winning numerous La Liga (6), Copa Del Rey (2), and UEFA Champions League titles (3). He is widely regarded as one of the best ever La Liga defenders, and a true leader on the pitch.

The former Italian international midfielder featured for his beloved AS Roma throughout his club career. Totti featured in over 700 matches for La Lupa between 1992 and 2017. Some of the titles he won with them include one Scudetto title and two Coppa Italia trophies. Individually he was twice named Serie A footballer of the year (2000, 2003)

The former German World Cup winner is one of the greatest players ever to play for FC Bayern Munich. Sepp Maier, as he is also known, kept in goal for over 18-years for the Bavarians, making over 500 appearances between 1962 and 1980. He won 4 Bundesliga and DFB-Pokal titles, respectively as well as 3 European club titles. Individually he was named German footballer of the year 3 times and also declared Germany’s goalkeeper of the century. After his football career, Maier went into coaching for both club and country and acted as a mentor to Oliver Kahn. 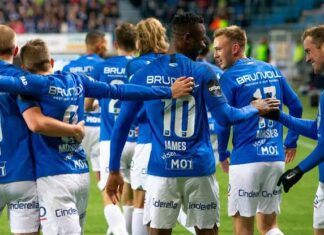 Collins Nwokolo - November 16, 2020
0
Norwegian football is home to some of the best sides that ply their trade in the Nordic country. Football is the most popular sport...