One of the highlights of the Italian Serie A season the derby match between Milan giants FC Internazionale and AC Milan lived up to its reputation as a pulsating action-filled match. The match was played on February 9th, 2020 at the San Siro. This year’s latest meeting saw the Nerazzurri run out 4-2 victors after an exhilaration comeback. Check the Winners and Losers on a night of memorable football.

The big Belgian hasn’t always gotten enough accolades for his effort and industry, but one thing you can take away from him is his reputation as an apex finisher. He proved this yet again last night for his club Inter. Romelu nodded past Milan goalkeeper Gianluigi Donnarumma in the 93rd minute to seal a famous 4-2 victory for the home side. This was the Inter number 9’s 17th league goal of the season leaving him 3rd on the goalscorer charts.

The former Premier League players made a telling impact in their side’s comeback win over the Rossoneri. The duo’s assists in the 93rd and 53rd minute respectively helped power Inter to an 82nd win over their bitter city rivals.

Inter Manager Conte has been under immense pressure these past few weeks. The former Juventus FC handler has received criticism from various quarters for his side’s perceived underwhelming performances of late. This victory could not have come at a better time for him. The manner of the comeback win especially over age-long rivals would have been extra pleasing. The victory also catapulted the Nerazzurri back to the summit of the Serie A. This will come as a needed boost for Conte as he tries to break the stranglehold of his former club, Juve, on the Scudetto title. After the disappointing 2020 UEFA Champions League campaign Conte will be extra motivated to guide his charges to victory in the league over the Old Lady. But the question still remains, can Inter Milan challenge Juventus for the Serie A crown?

The enigmatic Swede still has it in the old tank, he is one of the best veterans in football. He scored and assisted in a virtuoso 1st half display that seemed to roll back the years. A pity his team couldn’t maintain the momentum in the 2nd half as the Rossoneri blew their 2-0 lead before succumbing to an inspired Inter side. Despite the loss, Zlatan can hold his head up high. The former Swedish international produced a top-class performance that would have guaranteed victory on another day with better luck and defending.

The big Italian stopper must be wondering what hit him in the 2nd half. To concede four goals after the break would be hard to swallow. Particularly following such an impressive 1st half performance from AC Milan. Sadly the Rossoneri number 1 and his teammates will have to leave with the derby disappointment at least till next season.

A 9th defeat of the season doesn’t reflect well on the Milan Manager. Losing to your bitter rivals after being two goals up is even worse. Pioli was hired to revamp the fortunes of a fallen Milan team, but the consequence of this loss could find the former ACF Fiorentina out of the managerial door just as soon as he came in. 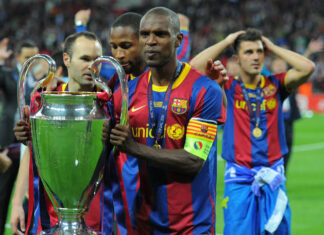